by aglasem
in Tamil Nadu Board
3 min read
0

Today i.e. on May 23, 2018, at 9:30 AM, the result of TN SSLC has been declared. Tamil Nadu board has released the result online on the official website tnresults.nic.in. The students can access the result by submitting the registration number and the date of birth. If we talk about the pass percentage then it is 94%. As per the analysis, the pass percentage has been increased 0.1% than the last year. This year, about 10,01,140 students appeared for the exams. As compared to the last year, there is a drop in the total appeared students because, in 2017, the number was 10.25 lakh. For more details on TN SSLC Result 2018 Statistics, you can check the entire page.

In this section, we are providing the number of students who have got the marks from 175 to 481. You can check it from the table given below:

You can check the subjects and the pass percentage of the respective subjects from the below points: 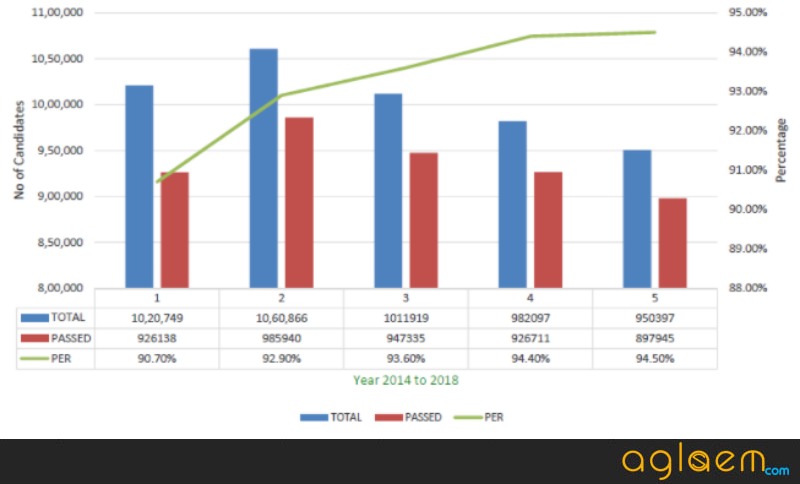 As per the past performance of the students, you can check the table given below:

About Tamil Nadu Board

TN Board came into existence in 1910 during the British Era. After that, it was established as the separate authority under the Department of Education, Government of Tamil Nadu. It was established to regulate and evaluate the education standards in the Tamilnadu. It has around 30,000+ schools affiliated to it. Tamil Nadu Board of Secondary Education (TNBSE) manages each and every activity related to the exam of class 10 and 12. Every year, the board conducts the exams for the students of SSLC and HSC. It also releases the result for the same.