by aglasem
in Punjab Board
3 min read
2

Last year, PSEB 12th Supplementary Result was announced on July 09, 2017. But this time, it has been declared in the month of October 2018. You can know the details and the important dates of the supplementary result from the table given below:

The students who will give the supplementary exams will be able to get the result soon. To check the result, you can follow the steps given below:

Step-1: Go to the official website. You can do so by clicking on the link which we have provided on this page above.

Step-2: After that, you will be redirected to the homepage of the website.

 Step-3: Then, you will have to click the link of “PSEB 12th Supplementary Result 2018 ” which will lead you to the credentials page. 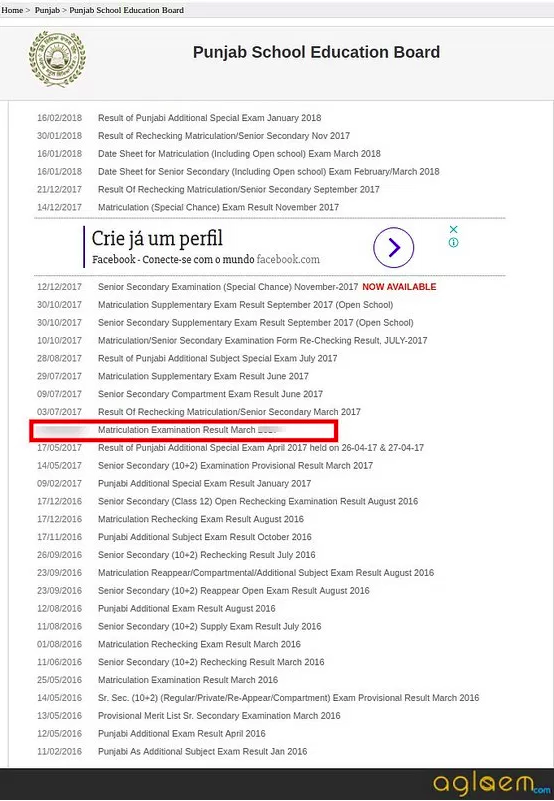 Step-4: Now, all you need to enter your roll number or roll code or your name.

Step-5: Once, you will submit the required fields then you will reach your result.

Step-6: your result will appear to you and then you should take the printout of it for the future reference.

Last year i.e. in 2017, the supplementary exams were conducted on June 23, 2017. Around 63,000 students took part in the compartmental exams last year. Before 2017, OSEB used to conduct the re-appear exams only for the Science students. But afterward, from 2017, the board is taking care of all the students of the various streams.

In the past year, less than 20% of students passed the exams of class 12 in the government schools. So, the board decided to transfer the principals of those schools. The teachers whose students faced the problems of low scores were also affected.

Talking about the performance of the students in the current year, the students achieved to gain the higher percentage. The overall pass percentage for this year was around 65.97%. For the different streams, the various number of students appeared for the exams. For the Science stream,32,907 students enrolled in the exams. While for the commerce stream, the number of students was 31,364 and in the arts and humanities, 2,12,945 appeared for the examination.

The board which manages all the activities related to the education of Punjab state is Punjab Board. The full name of the board is Punjab School of Education Board. It is well known as PSEB.  The board works for “The Land of Five Rivers”. PSEB was established in the year 1969. The board is responsible for each and every decision for the educational system of the state. It designs and regulates the course and curriculum of Punjab. It also maintains the education policies of the various schools which are affiliated to it. PSEB manages the schemes of secondary and sr. secondary status i.e for class 10th and 12th. It conducts the exams for those classes once a year in the month of March. After the completion of the exams, the board also releases the result.