NIOS 12th Result October 2018 – Finally, the time has come. NIOS Class 12 Result 2018 has been released for the October session. On December 15, 2018, NIOS has released the result officially on its website- nios.ac.in. So, all those students who were eagerly waiting for their result can check here their result through the link provided here. NIOS 12th Result October 2018 is available at the login. So, to check the result students need to enter the roll number in the space provided. NIOS 12th examinations for October 2018 was conducted from October 06 to November 05 2018. Now, to know more about your result scroll down the page and attain the entire information.

Latest: NIOS has released the application for Rechecking and Revaluation. To apply it visit the link below.

NIOS conducts the 12th class examinations in the month of October. After the examinations, now its time of the result. Last year NIOS has released the 12th class result on December 05, 2018. But this year, there is a delay in the declaration of the result. NIOS 12th result October 2018 will be for the second session. The first session held in the month of April. Now, to move further have a look at the table of the important dates given below.

Result: To check the availability of your NIOS 12th result 2018 Click here

In order to download your NIOS 12th result, 2018 have a look at the steps provided below.

Here in this section, we are going to discuss with you some of the important points regarding your result what it will display once declared. Now, have a look at the points given below.

Click Here to Apply for Revaluation and Rechecking Result 2018

After the declaration of the result, students have received their marks. But at the same time, there are some few who have not satisfied with the marks obtained. So, for them, NIOS provides the facility for the revaluation online. Desired students can apply for the same and get the result with the improved marks. As it is known that NIOS conducts the examinations twice a year. One in the month of April and the other in the month of October.

Now, if we talk about the result of the April session then after the result of the main examinations, NIOS has made the availability of the application forms in the month of June. Then by the first week of August, the institute has come up with the result of the revaluation. The revaluation result is available at the login. You just need to enter your correct roll number and submit it in order to get your result online. 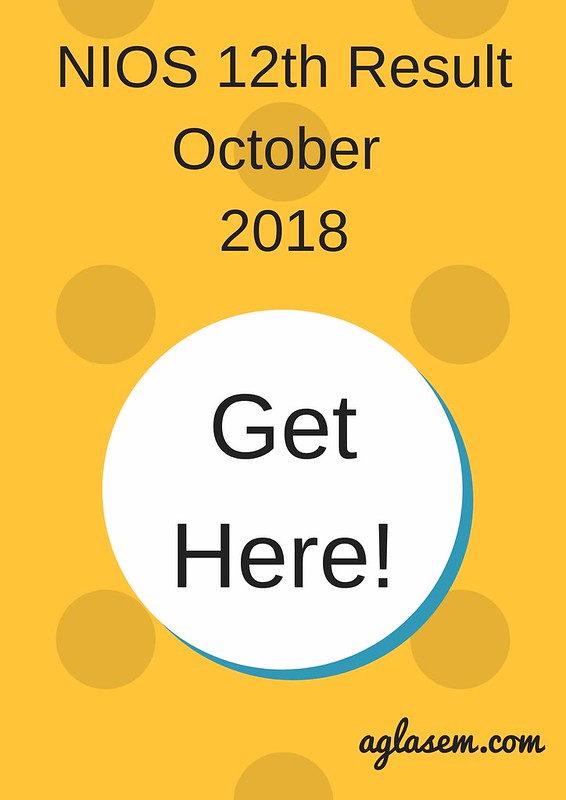 About National Institute of Open Schooling

NIOS has come into the existence in the year 1989. Formerly, it is known as National Open School and now it is known as National Institute of Open Schooling. NIOS conducts the 12th class as well as the 10th class examinations. Apart from this, NIOS has also organized the ‘ On Demand Examinations’. Under this students can take their examinations as per their wish as well as their preparation. This step has been taken keeping in mind the student’s welfare.

If you have any query regarding it, then please let us know through your comments in the box provided below. Have a nice day!