NIOS 12th Result 2018 is declared by National Institute of Open Schooling. Students can check NIOS 12th Result 2018 April from official website, for which, direct link is made available on this page as per schedule. Please note that NIOS held an examination for class 12th students in the month of April, for which, result is yet to be announced. Separate exams are held for on-demand students, also known as NIOS ODES (On-Demand Examination System); for that result is announced. Scroll down for links of NIOS 12th Result 2018 which you wish to check. For checking your result candidates must ready with their roll number. Let’s move further to know more about your NIOS Result.

NIOS 12th examination 2018 was conducted in the month of April. National Institute of Open Schooling is the one who responsible for conducting the examination as well as the declaration of the result 2018. Like other organizations, NIOS also also release the result online. So, we are here to discuss with you that how you can check your NIOS 12th result April 2018 once it will declare. Before moving into the next section first check the table of the important dates given below.

How NIOS 12th Result 2018 obtained? To Know the answer of it follow the steps given below.

1st Step: At first click on the link which will updates on this page as per the official declaration of the result.

2nd Step: Once you click on the link you will reach to its homepage. 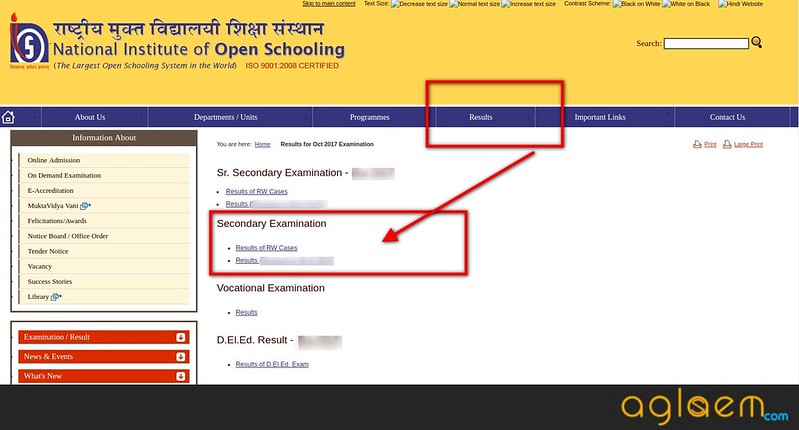 4th Step: Click on your respective result. As you click, a login window will appear on your screen.

6th Step: After this, your result will appear on your screen, check it carefully and download it.

7th Step: For future reference take the print out of your result and keep it safe with you.

In this section, we are going to discuss the details which are going to appear on your 12th marksheet of NIOS 2018.

After the declaration of the result, what if a student is not satisfied with the marks obtained? For this, NIOS has decided to conduct the re-evaluation or re-verification of the answer sheets of the examination. For this, all the desired candidates are required to fill an application form online. Also, you need to make the payment of the desired amount.

After the re-evaluation, NIOS release the result once again. If there is an increment in the marks then new will considered otherwise there will no change occur in the result.

The analysis of the result plays a very important role in evaluating the performance of the students every year. Through this, the performance of the board is also analyzed. Also, after analyzing the data of the previous years it can be said that the girls of NIOS have performed better than the boys appeared. last year, 5,45, 628 students have appeared for the examination. Now, let’s check the passing percentage of the students from last few years.

About National Institute of Open Schooling

National Institute of Open Schooling (NIOS) board founded on November 3, 1989. It is the distance education board. NIOS Board is the distance education board which works under the government of India. The board has developed with the aim of providing the best education with creative, practical knowledge to the students. It having various affiliated schools using the study plan, study material to impart education to the students.

The National Institute of Open Schooling (NIOS) was formerly National Open School. The NIOS is a national board that administers examinations for Secondary and Senior Secondary examinations of open schools which are similar to the CBSE and the CISCE to increase literacy and provides education to rural areas. It had a cumulative enrolment of about 1.5 million students from 2004 to 2009 at secondary and senior secondary levels and enrolls about 4,00,000 students annually which make it the largest open schooling system in the world.