by diksha
in Karnataka Board
4 min read
22

Karnataka SSLC Result 2019 has been announced through a press conference. As per the reports, 73.7% of students have passed the SSLC examinations. A direct link to check the result is available on this page. Karnataka Secondary Education Examination Board (KSEEB) has released the SSLC result officially on its website- karresults.nic.in or kseeb.kar.nic.in. Srujana D (St Philomena English High School, Bangalore) and N Parameshwar Naik (Colaba Vithob Shanbhag, Uttara Kannada) has secured the first position in SSLC 10th examination by scoring the total 625 full marks. Now, to know more about the SSLC result for the academic session 2018-19 then follow the content as given below.

Karnataka SSLC (class 10th) examinations conducted in the month of March. This year around 8,25,468 lakhs students appeared for SSLC examinations and out of this around 6,08,336 students have passed the exams. Though as compared to the last year there is an increase of around 1.77% in the overall pass percentage. To check the result students must ready with their ‘Registration Number‘ mentioned on your hall ticket. Last year the board has released the result on May 07 but this year the board has announced the result a bit earlier. Now, before moving further first have a look at the table of the dates of events given below.

Result: To check the availability of your Karnataka SSLC result 2019 Click Here

The board has conducted the examinations in the month of March. Now, its time for the result. So, to download your Karnataka SSLC Result 2019 students are advised to follow the steps provided in the section given below.

1st Step- Firstly, click on the link of the result will available on this page. Or you can also check its availability by visiting its official website.

2nd Step- After this, a login window will appear on your screen.

3rd Step- Here you have to enter the registration number in the space provided.

4th  Step- At the end click on the submit button.

5th Step- After submitting all the details successfully your Karnataka SSLC result 2019 will appear on the screen.

6th Step- Check your result very carefully and download it.

Here in this section, you will come across all the details mentioned in your upcoming result. So, have a look at the details given below.

Karnataka SSLC supplementary result is the second chance provided to the students in order to clear their exams. After the declaration of the result of the main examinations, there are few students who are not able to clear their examinations in the first attempt. So, keeping in mind the future of the lakhs of the students Karnataka board conducts the supplementary examinations. The board conducts the examinations in the month of June. After this, by the month of July, the board announced the result at the state level. In 2018, Karnataka Board has announced the SSLC supplementary result 2018 on July 19. 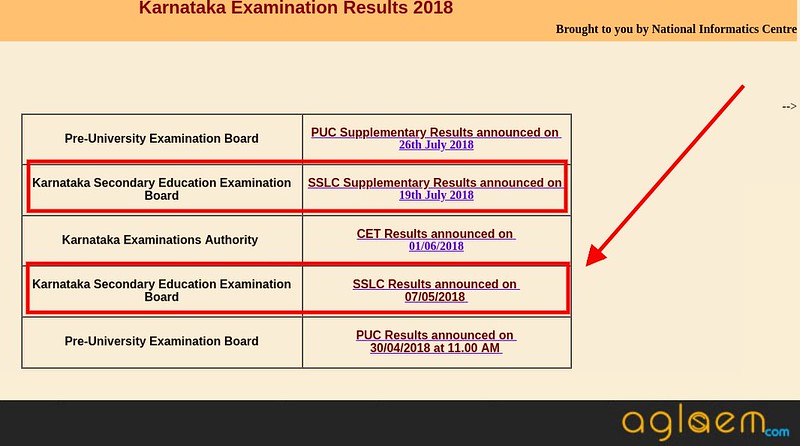 On May 07, 2018 Karnataka board has come up with the result of SSLC. Total around 8,38,088 students have appeared for the examinations. Out of this total 6,02,802 students have passed the examinations. In 2018, total around 71.93% is the passing percentage of the students from Karnataka board. As compared to the year 2017 there is an increment in the overall percentage of around 4.06%. Considering the girls vs boys, the girls of the state scored a total of 78.01% while the boys scored a total of 66.56%. So, we can say that the Girls of the state has passed the SSLC examinations with the flying colors. And we hope that there will be better performance in session 2019.

About Karnataka Secondary Education Examination Board

If you have any query regarding this then please let us know through your comments in the box provided below!
Karnataka Board Result 2019