by aglasem
in CBSE Board
3 min read
1

CBSE Class 12 Result 2018 Date will be announced soon. Class 12 Result 2018 of CBSE Board will be available on the official website cbse.nic.in. A link also will be given for checking the results. CBSE is also known as Central Board of Secondary Education. Students who have given the class 12th board can check the result through the link which has been given. Class 12th marks are important for the students. They must have prepared well for the exam.

CBSE has not released the official date regarding Class 12 Result 2018. As soon as the date will be released, we will upate this page.

Students of class 12th can check the CBSE Class 12 Result 2018 Date page for all the important information about the result announcement, how to check the results, how the class 12th scores are useful for them and many more things to know. Scroll further.

When will the results be announced?

CBSE Class 12th exams are conducted in the month of March and the results are announced by the end of May or in the 1st week of June. However, this year because of re-conduct of the Economics paper of class 12th, it is expected that the results of class 12th might be a little delayed. 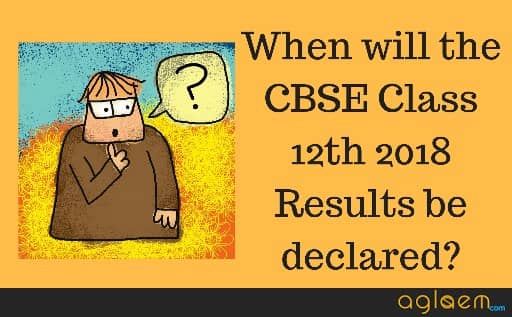 Economics Paper of Class 12th CBSE was reportedly leaked. The CBSE had announced that the Economics paper would be re-conducted on April 25, 2018. Because of this, it might be possible that the result might be declared a little late. Candidates are advised that they wait for the official information and not believe on any rumors.

The class 12th marks of the candidate are very crucial in determining the shape of their future. Many colleges set the class 12 marks as the eligibility criteria for admissions to their courses.

Also, if the candidate wants to sit for the entrance exams such as engineering and medical, then also it is required that they must have a minimum percentage of marks in class 12th to be eligible for sitting in the entrance exam.

For ex:  Indian Institute of Technology demand top 20 percentile in boards or min 75% in 12th boards for admissions to this prestigious college. For taking admissions to the colleges apart from IITs, class 12th marks play an important role in determining their chances of admission to these colleges. Also in many government jobs, class 12th marks are counted while calculating the final merit. Thus it is quite important that the students prepare well to score well in this exams.

The students who have given the CBSE Class 12th Board exam can follow the steps given below to check CBSE Class 12th 2018 Results. It will be available on the official website. They can also check the results from the link. Read further.

The CBSE Class 12th result will contain the following details:

What After Class 12th Result?

CBSE announces the result for class 12th after the exam. They release the results in time so that the aspirants do not face any difficulty in applying to the various colleges. This score is also used as an eligibility criterion for many entrances which are conducted around this time only. Candidates are advised that they apply for the admissions early so that they don’t miss the opportunity.