by aglasem
in Bihar Board
Reading Time: 2 mins read
0

She turned heads when National Eligibility-cum-Entrance Test result was announced. Now, she has done it again. Kalpana Kumari from Sheohar Bihar has topped Bihar Class 12th examination as well. With the result of Bihar Board class 12th result, news of her secured maximum marks in Science Stream spread like a wildfire.

Many many congratulations to Kalpana for such marvellous performance. The entire team of Aglasem wishes you more success in life ahead. Kalpana has secured 434 marks out of 500. Second in the race is Abhinav Adarsh, who got 421 marks in the exam. The third position has been secured by Rudresh Raj Verma with 420 marks. 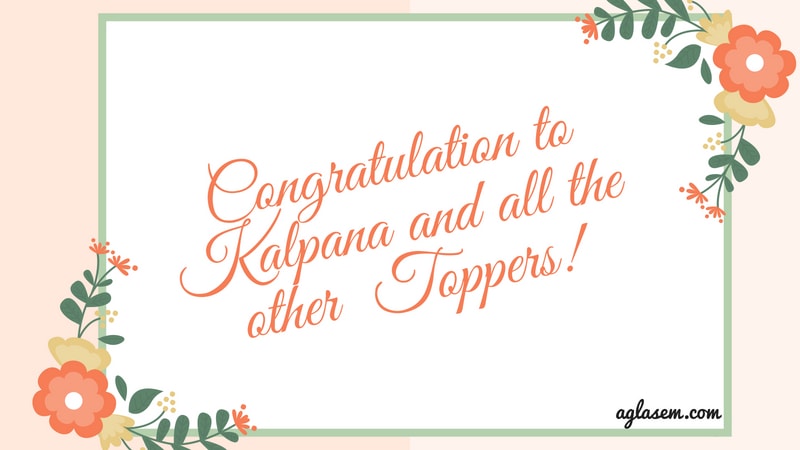 Our topper dreams of studying in All Indian Institute of Medical Sciences (AIIMS) and is waiting for AIIMS result. The AIIMS MBBS 2018 Result is due to be announced on June 18, 2018, and for sure Kalpana will score well.

She has really worked hard for this success. Her daily study routine included 12 to 13 hours of study. For NEET 2018, she used NCERT books and practiced mock test.

Bihar toppers scam is not an unusual happening but this time BSEB has done the physical verification. The toppers were cross-checked to verify they deserved the position. For past few years, the actual toppers of Bihar were overshadowed by the scandal and forged toppers. However, this year, all the candidates who studied hard got what they deserved.

The result of Bihar Class 12th 2018 was announced today, at 4:25 pm. BSEB announced the result online, at biharboardonline.in. In order to check the result, candidates had to enter roll code and roll number. The Board announced the result stream wise, for science, commerce and arts stream. Students who are not satisfied with their performance may apply for the revaluation.